In the context of the pro-Russian protests in Ukraine derived from the Euromaidan that also generated the Crimean crisis of 2014 and whose sovereignty has not been recognized by any state, the People's Republic of Donetsk announced the intentions of holding a referendum in the region, in which voters would decide on the proclamation of the 'state independence' of the Oblast with respect to Ukraine. The declaration of independence is rejected by Ukraine, which sent military troops to Donetsk and other regions with active secessionist groups to eleminate any pro-russian forces.

Strong opposition from the Ukrainian Army and the newly formed Ukrainian National Guard, including pro-European volunteers and mercenaries paid by Kiev, is expected. Mainly equipped with light weapons and machineguns. The deployment of ukranian armored units in this area has been minimal due to forested terrain and nearby Russian air support.

The Ukrainian army has begun to deploy western counter-battery radars against russian heavy artillery near the Donetsk border. With them they have been able to detect our artillery positions, attack them, and infringe heavy losses. In order to avoid suffering more casualties and losing more guns it has been decided to find and destroy those counter-battery radars  in all possible ways. The new radars are electronically scanned, very small and are mounted on top of Wiesel armored vehicles, so the aerial reconnaissance forces are having hard times to find them and once located due to their great mobility they constantly change position so it has been impossible to destroy them from the air.

We have to infiltrate behind the Ukrainian lines and perform direction finding duties to covertly determine their position and attack them in a surprising way. A group of three radars have been detected in the area of operations.

The equipment we have is extremely portable, so it only has a maximum effective range of 2KM and an accuracy of one degree. 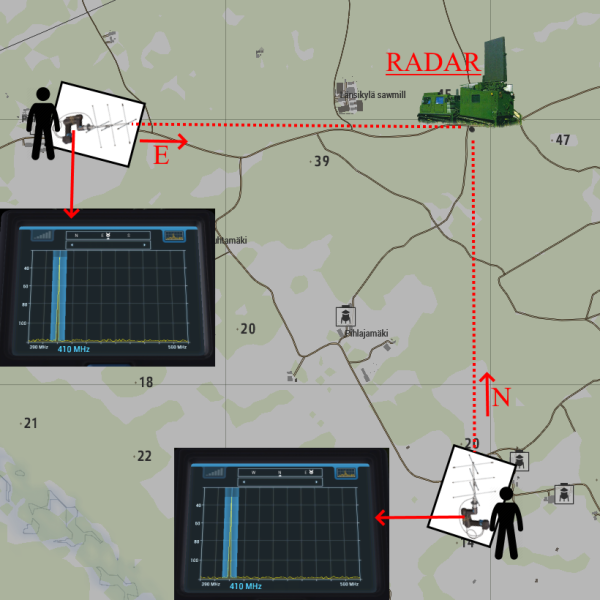 A BTR-80 will deploy you at the infiltration point and will pick you up in the same place when all three radars are destroyed.


Enable javascript to be able to download from Armaholic please!